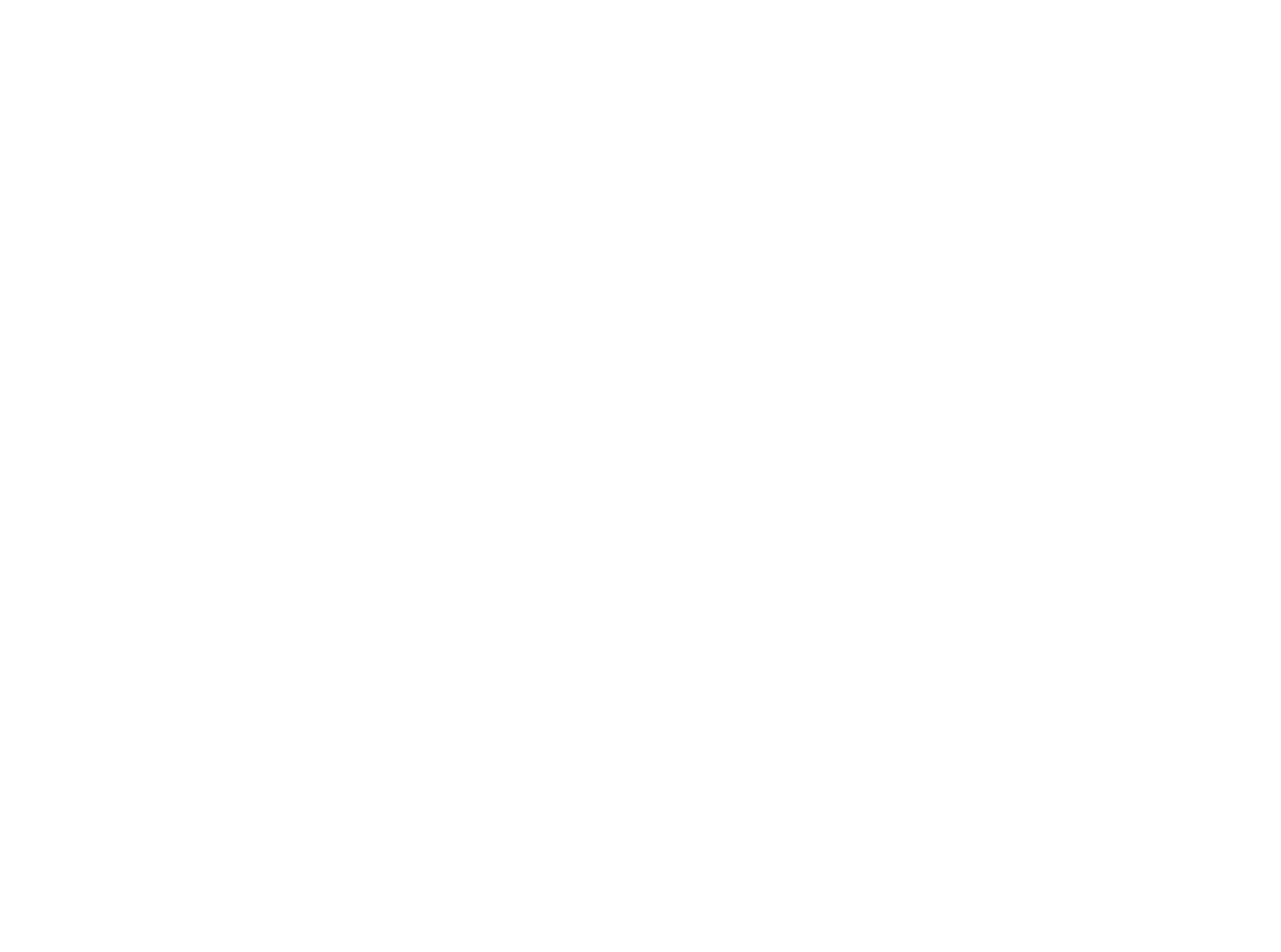 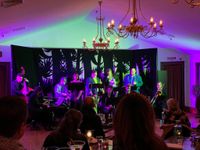 Initially a student-created ensemble on campus, Crooner & Co. have moved out into the broader community to share their music with a larger audience.

Crooner & Co. will be playing in our large second floor room where we'll clear out the middle of the floor so you can let loose! 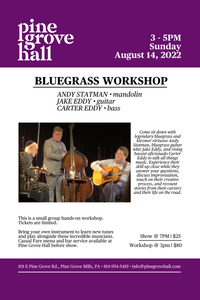 A very special 2-hour conversation and hands-on workshop with Andy Statman, Jake Eddy and Carter Eddy in this special pre-show event. Experience their skill up close while they answer your questions discuss improvisation touch on their creative process, and recount stories from their careers and life on the road. Don't forget to bring your own instrument to learn new tunes and play alongside these incredible musicians. The workshop will be held at Pine Grove Hall.

BLUEGRASS WORKSHOP - 3pm to 5pm Come sit with Andy Statman, Jake Eddy and Carter Eddy in this special pre-show workshop to talk all things music. Experience their skill up close while they answer your questions discuss improvisation touch on their creative process, and recount stories from their careers and life on the road. Don't forget to bring your own instrument to learn new tunes and play alongside these incredible musicians. The workshop will be held at Pine Grove Hall. 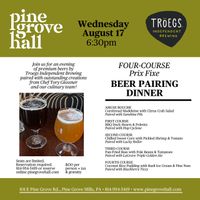 Join us for an evening of premium beers by Troegs Independent Brewing paired with a four-course dinner from Chef Tory Glossner and our culinary team.

Granma Ben is an acoustic Americana trio based out of Bellefonte City, Pennsylvania that started congregating in early 2021. They baste their own flavor onto a wide variety of free-range, hand-picked, grass-fed covers. A healthy dose of their own original music is always thrown into the mix for good measure. Band members are Doug Irwin on rhythm guitar & vocals, Bryan Homan on bass, mandolin & vocals and Brian Cleary on lead guitar & vocals. 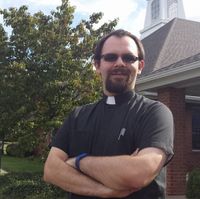 Writers' Round | Hosted by Jud Mantz

Our August Writers' Round will be hosted by Judson Mantz. Joining Judson will be Doug Irwin, Ed Kenepp and Emily Bedell. Our monthly Writers’ Round showcases multiple writer/artists on stage at the same time, each playing one song going "AROUND" until 3, 4, or five "rounds" have been completed. They'll present new and sometimes not even fully completed songs in our exquisite listening room environment. It's an intimate evening that you won't want to miss.

JUDSON MANTZ has been a singer/songwriter for more than 30 years. He has self-released five studio albums. Belch of the Muses (1998) and The Road Less Traveled (2002) with his band 3-D Betty, In An August Room (2012) a solo project, Raucous Polyglot (2015) with his band August Room and Sunday Night Feeling (2019) his latest solo CD. He is currently working in the studio with his latest band, The Remnants of Betty. For a complete list of his CDs, videos and free downloads of his music, visit www.augustroom.com

ED KENEPP is a Musician/ songwriter from Lewistown Pa. He has played in many bands in the State College music scene from 1980 - 2000 including Hat Trick, Too Normal, Foxie , Stickmen, JR Mangan Band , Hardline and Soul Gypsies. He quit playing live in 2000. In 2010 Ed started his Youtube channel “Woodshed with Ed” where he invited old friends to jam at his Woodshed recording live, 1 take songs and jams and posting over 80 videos from 2010 to 2019. At age 65 he is still writing and recording new original music. To view Ed’s music videos go to : YouTube.com/edkenepp

Singer-songwriter DOUG IRWIN hails from Bellefonte in Central Pennsylvania. He bought his first guitar at the tender young age of 39. He taught himself a few chords, learned himself a few tunes & soon decided to try his hand at writing some songs of his own. He reasoned, “How hard can it really be?” He belts out three-chord, rhythm-fueled originals & hand-picked, free-range, grass-fed covers. Years ago his song Rattle the Cage received Honorable Mention in the Woody Guthrie Folk Festival Songwriting Competition and his song For the Bush House merited 3rd place at the Smoked Country Jam Pennsylvania Heritage Songwriting Contest. He almost always writes his bios in the third person. He truly hopes you hear something that you like.

State College native EMILY BEDELL made her way to Portland, Maine where she enjoys building connections among farms, restaurants, and community to encourage understanding of the importance of personal relationships to environmental sustainability. In her spare time, Emily enjoys writing poetry, music, and developing her own understanding of our world and its place in time and space.

EMMETT DRUEDING is a Philadelphia-based guitarist, singer and songwriter with an admiration for Chet Atkins, The Beatles, Elliott Smith, Dave Van Ronk and the greats of jazz and country blues. Drueding has spent years developing his distinctive guitar-centric sound that draws fluidly on these influences and others. In 2015, Drueding released his first solo EP, titled Strange Bruise. In 2017 he released Let’s Hook, under the moniker Sons of EL and then his first solo full length Tightrope Walker in 2019. Emmett’s self titled release is due later in 2022. featuring songs he wrote and recorded in his home studio during the pandemic. On Drueding’s writing and performing style, indie music blog B-Sides and Badlands noted, “He might be playing a character . . . but his conviction is as ripe as grapes on a vine ready for harvest.”

NATE CUTSHALL is a guitar-picker, harmonica-slinger, and songsmith from Central Pennsylvania. He has been performing up and down the east coast for the past decade. His music ranges from the serious to the humorous, from the historical to the abstract, and seeks to leave listeners with a full heart.

Lancaster-based saxophonist Ryan Kauffman is a member of the Harrisburg Jazz Collective and the NakedEye Ensemble. Kevin Lowe is the drummer in the Zeropoint Big Band, Erin Condo & the Hoofties, and Lemont. Bassist Bob Hart is in Zeropoint and Pure Cane Sugar, and has toured with Debbie Harry, Van Dyke Parks, and Kat Edmondson. Pianist Clay Wulbrecht is a graduate of the esteemed jazz studies program at Indiana University. And saxophonist Rick Hirsch is in Zeropoint and Erin Condo & the Hoofties, and is an internationally-performed jazz composer.

Meet the Author | Dr. Graham Spanier "In the Lions' Den: The Penn State Scandal and a Rush to Judgement"

MEET THE AUTHOR: Dr. Graham Spanier | "In The Lions' Den: The Penn State Scandal and a Rush to Judgement."

In The Lions' Den: The Penn State Scandal and a Rush to Judgement chronicles a criminal justice system run amok, political vindictiveness and retribution, moral panic, and the influence of a twisted media narrative. It is, in short, the anatomy of a smear, a memoir told by the university president who lost his job after an outstanding career in higher education. The story, which is so outlandish that it would be impossible to make up, involves villains and heroes, fear and bravery, the rehabilitative value of friends and family, and coping with adversity.

Pine Grove Hall's small plates menu and full bar service available throughout the evening. This is a free event, however seating is limited. Make a reservation to confirm a seat.