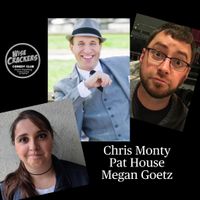 This week's show features Chris Monty and Pat House and MC, Megan Goetz. Come for dinner before the show, or just comer for the show! Tickets are $25 and the show is 21 + ONLY.

Chris Monty is one of New York's busier comedians. Along with being a regular at New York's best comedy clubs, Chris is a terrific actor and can be seen in the comedy film Paul Bart: Mall Cop 2. Along with numerous stints as an opening act for Joan Rivers and B.B. King, Chris headlines in such places as Atlantic City, Las Vegas and Reno.

Pat House is a nationally touring comedian out of Philadelphia. For Pat, everyday life seems to be a great source of material. With matter-of-fact delivery and sharp observations, Pat's material is relatable to anyone tortured by the absurdity of others. A regular performer in comedy clubs, casinos and theaters all over the country, he has been a choice opener for Sebastian Maniscalco, Tom Segura and Dan Cummins.

Our MC for the evening is Megan Goetz. Megan's standup has been described as silly and genuine. Her act includes things specific to her, like being a woman and a twin, but also touches on more common topics such as dating and family. She has opened for Gary Gulman, Sasheer Zamata, Joe List, and many more. Currently, she is the co-host of a YouTube series called “All Set”, and is the co-host of the spooky comedy podcast “Real Chills