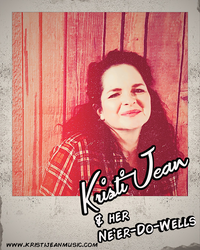 Kristi Jean and Her Ne'er-Do-Wells

A jumpin' collision between 1950's steel guitar infused county and bass-slapping', guitar-twangin' early rockabilly beats. Driven by the feisty and authentic voice of Kristi Jean, the band relives the days of swingin' 50's honky-tonks, all with a their own twist.

Kristi Jean grew up on the traditional country music that played from the family’s am radio. While her roots were planted in the Texas soil, Kristi Jean traveled across the heartland singing rock-and-roll, eventually landing in central Pennsylvania. She later returned to her country music roots when she portrayed Patsy Cline in the musical “Always…Patsy Cline.” Since then, Kristi Jean has been performing a blend of country, rockabilly, and western swing with her band the Ne’er-Do-Wells.